The foundation stone of the Abu Dhabi Ferrari world was placed on 3 November 2007. The park is located on Yas Island, which is only a few kilometers from Abu Dhabi city centre.

It almost took three years to generate this park and it was officially opened for the public on 4th November 2010. It covers an area of 86,000 square metres.

Ferrari World was planned by Aldar Properties, the biggest developer of Abu Dhabi. It was named as the “Middle East Leading Tourist Attraction” at the World Travel Awards in the year 2016. 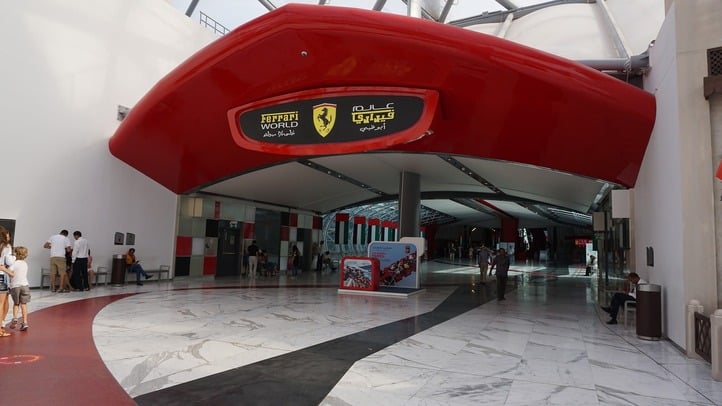 You will really love this place, if you are fascinated by Ferrari. It is all about speed, thrill and fun! You can enjoy the incredible luxury-sports car rides with your family and friends to make your holiday in Abu Dhabi a memorable one.

It’s the first Ferrari branded theme park in the world. This park has the world’s fastest roller coaster rides which will make your stomach churn as it is really not an easy ride.

It almost moves with lightning effect having a speed of 149mph which it attains in just 5 seconds. The hydraulic launch system which is used in aircraft carriers mainly is the reason behind this unimaginable speed.

The 2km long track has some amazing corners that make this ride more exciting and enjoyable. Ferrari World in United Arab Emirates has around 37 record-breaking rides which comprises of all age groups. The variety of rides available makes it a family friendly park.

1.Italian marque: It is the first theme park which is dedicated completely to the legendary Italian marque. The crown is 200,000 square metres long and carries the largest Ferrari logo ever created the famed prancing horse. The park can handle up to 10,000 visitors a day.

The main attraction of this park is that it contains 20 rides which tells the Ferrari story. Also has the world’s fastest rollercoaster. The top attractions include the V12, a flume ride, the G-Force tower, which takes visitors to a height of 62m. Formula Rossa the world’s fastest rollercoaster is the diamond in Ferrari World. The roller coaster runs at a speed of 150mph an hour along a 2.4km track.

The main attraction which is actually worth experiencing is the G-force of a Ferrari on a tower ride that will shoot you through the roof, 62 meters in the air. Also wide variety of rides and attractions suitable for every age member of the family at Ferrari World.

The theme park is often visited by F1 superstars like Kimi Raikkonen and Fernando Alonso. The bridge area of 86,000 m², is an attraction in the Park which brings to life a different part of the Ferrari story, from Cinema Maranello it captures the power, speed and freedom of a F1™ car. You will surely find something suiting your preferences among the park.

In order to let your kids experience the thrill of driving a Ferrari they can take part in the Junior Auto School and learn about driving, its regulations and traffic signs, through a short educational film, and some instructions which they will receive from trained experts, after which they can drive their own Ferrari, a fun-sized 430 GT Spider, and can practice what all they have learned.

A unique 4D virtual stimulator. Flying along hillsides and venture deep below the surface of the ocean. Feeling the heat of the jungle or the coldness of ice caves as the temperature goes down, changing of lights giving you a chilling experience.

It is a paradise for kids as they too can have fun at this theme park. It is a must visit place with the  play area that has features like remote controlled mini Ferrari, racing cars and pedal cars. 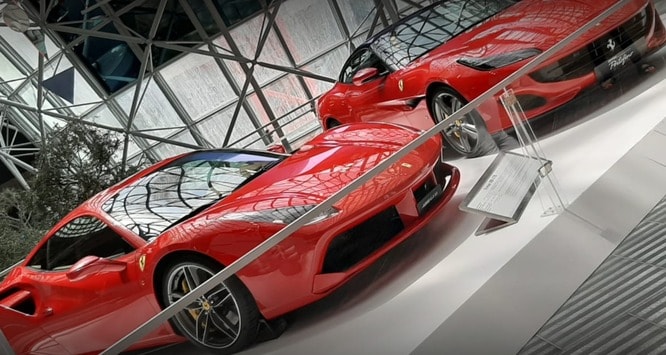 Abu Dhabi Ferrari world does not have just thrilling rides but it’s a full package of entertainment. It is well known for its live shows that entertain the audience Tyre Change and the live theatre RED is one thing you cannot miss. Also the 3D animation show Viva Ferrari is a must watch.

It is definitely going to be a heart stealer for your kids as it takes you to Italy. It is the best and most unique corner of the Abu Dhabi Ferrari world. A small 1958 Ferrari 250 California car takes the kids around the miniatures of the landmarks, iconic places, race tracks and beaches located in Italy.

It will be a dream come true moment for every Ferrari lover. You just need to be more than 21 years of age and have a license issued by the UAE government and you can actually ride a real Ferrari with a trained racing expert. If you do not have a license then also you can enjoy the ride as a passenger.

There are two main beautiful shops inside the theme park, The Ferrari Store and the Ferrari Past & Present Store which have the car merchandise on sale and also have a huge collection of branded toys and Italian products.

It is a ride that will challenge your instinctive, as the ride is about the two F430 spider-shaped cars that moves along parallel tracks. The thrill increases when, at several points these twin roller-coasters cross each other paths making it the riders feel that they are about to bang with each other. The ride would feel like experiencing a hunt scene from the Fast and Furious series.

It is a racing simulator virtual game. It is a six-man velocity race around a virtual Yas Marina Circuit. It enables you to control your drive complete the feel of a real race through the 180-degree screens in front of you and a steering wheel that is in your hand. The small car-like-pods, in which every player is seated; it supports a hydraulic feature that reacts to everything that occurs on the screen. It gives you feel of watching a 7D movie in a theatre. Through pulling the break and you get a hit against something and feel the bump, pressing the accelerator makes you feel the speed.

Gives you a bungee jumping feels as it is really not for the weak-hearts the space shot ride will be taking you to 62 mts height from the ground level and drop you straight down and straight away you will be falling at a speed of 12 meters per second, one of the most evil yet a safe landing ride will surely make you think about your last wish! 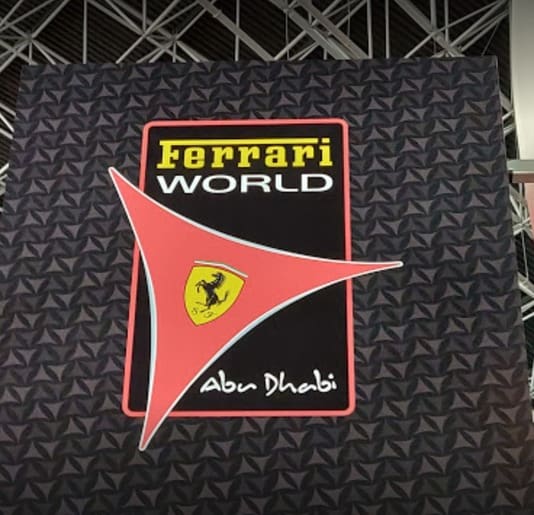 Will turn your world upside down. This ride is inspired by the ‘aces of aces’ Count Baracca. The 63 metres long ride has a marvelous 51-degree incline and you would experience as moving at a speed of 120km/h on the world’s highest roller coaster.

A cup-saucer ride having a Ferrari twist. The seating is in the F1 inspired giant tyre that spins, collide, rotate and slide into the fellow passengers. The fun is when you try to assume the direction of the movement and you adjust your mind and body accordingly but couldn’t succeed. The sudden and unpredictable moves create the tickling effect in your stomach.

A proud feeling of figuring the fact that all the rides in Abu Dhabi Ferrari world are about speed up, this comes as a surprise. Firstly, the ride looks like any other roller coaster ride but in seconds it turns out to be different from what you imagined. You follow an animated character, who flies at a high speed through different mesmerizing locations. The effects of its movements in the flight are exciting.

Abu Dhabi Ferrari world has 100,000 cubic meters of material which were used to pour the slabs of Abu Dhabi Ferrari world, more than what was used for Wembley Stadium in London. It has the largest space frame structure ever built having a total of approximately 172,000 members and 43,100 nodes.

20.A Solid One: Abu Dhabi Ferrari world needed 12,370 tons of steel to create its structure as compare to the Eiffel Tower which only needed 7,00 0 tons. The enclosed volume of air of the upper plaza level is 3,000,000 cubic meters, equivalent to the total volume of air in 41 hot air balloons. The gross footprint area of the plaza level is equivalent to approximately 15 American football fields.