Saudi Arabia’s Jeddah Tower has been a source of speculation and excitement over the past few years. This soon to be the tallest building in the world has had its share of hiccups along the way. But finally, construction is progressing again. 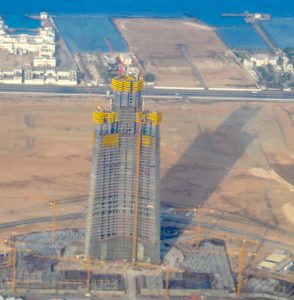 Though the height remains undisclosed, it is certainly going to be around 591 ft. taller than the Burj Khalifa. Read on to know more thrilling facts about this long-awaited tower.

Why is Saudi Arabia so invested in this project?

The kingdom is looking at the Jeddah Tower to bring in more tourists and development in the city of Jeddah.

The tower has not been completed yet but still, people from all over the world are keeping tabs on it. Curiosity and wonder are set to attract tourists and many investments soon.

Named the Kingdom Tower before, it was started on 1 April 2013. At that time, it was supposed to be completed by 2018. The tower will have hotels, homes, and offices, apart from various tourist spots inside it.

Patios dot the tower on three sides. The tower will hold up more than 325 apartments across seven floors, out of 252 (excluding two underground ones). It will have seven duplexes and 96 serviced apartments as well.

As for the 59 elevators, they will travel up to 660 meters. It also has 12 escalators. It also features double-decker lifts. These lifts can take you from Level 1 to the 157th floor in just over a minute – 66.5 seconds.

The 157th and 158th floors are where the observation deck – the largest in the world – will be situated.Space which was originally intended to be used as a helipad will now act as an outdoor balcony of 98 foot.

The tower has been designed keeping in mind the wind it will face and the demand of space inside. Which is why the shard is three sides and aerodynamic. Usable area is maximized by the taper. The low conductivity of the glass used is going to decrease the energy consumption of the tower by a lot.

The Mastermind and cost Behind It

The tower has been designed by the same architect who was at the helm of Burj Khalifa’s construction – Adrian Smith. The budget of the Jeddah Tower has been calculated to be around a whopping $2 billion.

In the year 2017, the two main people behind the project got included in Saudi Arabia’s campaign against corruption. Prince Al-Waleel Bin Talal and Bakr Bin Laden’s involvement became a huge obstacle in the tower’s construction.

Aside from that, the many economic concerns raised by other prominent figures also contributed to the construction getting stopped.

When will it be completed?

This time around, it will be finished by 2020. The developers who are playing a major role in its construction have confirmed the same to CNN as well.