Makkah Clock Royal Tower is a beautifully built clock that glows right next to kaaba in the Holest City of Islam, the Mecca.

This awe-striking clock is a Royal tower with 76-story height. Rising like a beacon, this Royal tower from the Holy city is encased by humongous yet glorious mountains. 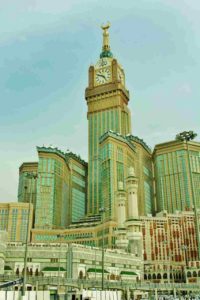 The Royal Clock hovers over Makkah, which is known to be filled with superlatives and there are several Makkah clock royal tower facts, which you must know.

We have listed 10 such facts here!

1.The Height of the Tower:

The Royal Tower of Makkah boasts a height of 601 meters which equals to 1972 feet is said to be the 3rd tallest building ever built in the world, and; also, it is the 4th tallest building which is freestanding.

2.Time can be read from a great distance:

Although the Makkah Royal Tower is the tallest clock tower in the world, it is built in such a way that the time on it can be read from a distance of 17 kilometers away.

3.Constructed within a shocking time period:

As the Royal Tower of Makkah is huge, it is undoubtedly shocking to know that the entire tower was built just within 6 years from the beginning till the end.

It must sound like astounding news to you, but the clock face of the tower is 35 times larger than that of the legendary Big Ben. And, all the four clock faces combined are equipped with about two million LED lights used for illumination.

The pinnacle of such a huge structure has 26 searchlights instilled in it, which can shoot up to 10 km up in the sky. Whenever there is a special occasion in Makkah, the night sky of the city is adorned with a band of vertical lights that sparkle up the entire place.

6.Cost of the entire project sums up to $15 billion:

The building of the Makkah royal clock tower hotel project demanded the expenditure of 15 billion dollars, which included 6 different buildings housing an array of apartments and luxury hotels fabricated over a multi-story shopping mall slab.

7.Largest Building on the planet:

If you start counting the number of floors that the clock tower Makkah consists of, it is by far the largest building on the planet and covers a colossal area of 1,500,000 m2.

8.Has the largest clock tower face in the world:

The Royal Clock tower has 4 faces and on each of the sides, there is a dial of measurement of 43 meters, which is in numbers the largest clock face that is equipped on the thrusting pastiche.

9.The Tower is adorned with 24-carat gold as well:

The entire complex consists of 98 million glass mosaic tiles and the 23m crescent moon that is mounted on the top of the tower are all made up of fiberglass-backed mosaic gold.

The Sky-scraper has an observation deck perched at the height of 558 meters above the ground.