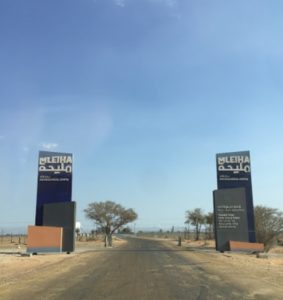 Here, historical datas and details of excavations and discoveries relevant to Mleiha and it’s adjacent areas like Al Thuqeibah, Jebel Faya, Al Madam, and Jebel Buhais, are preserved since 40 years.

The centre was established by the Sharjah Investment and Development Authority (Shurooq) and opened by the Ruler of Sharjah- Dr. Sultan bin Mohammed Al Qasimi on 24th January,2016.

The archaeological excavations evident the presence of humans in Mleiha since 1,30,000-1,40,000 years ago, that is, since the Paleolithic age.

Thus, it can also be assumed that the sequence of human proceeded from Africa to Persian Gulf, Europe, Middle east and then to Asia.

The widely scattered remains like the Mleiha fort near this archaeological centre proves the existence of the place since 300 BCE, the South Arabian kingdom era and its proceeding thereafter.

Thursday to Friday- 9AM to 9PM

Saturday to Wednesday- 9AM to 7PM

Mleiha is a wonderful area surrounded by deserts all around seems like a hidden treasure.

Literally, it is located to the south of Al Dhaid near Jebel Fayah which is situated around 65km to the south-east of Sharjah city.

Initially, the entrance fee is 25 AED . There are different fees and charges for different stuffs like audio-visual session, display of old fossils, antique articles and other display items of pre-Islamic era.

Through the excavations many facts come to be known about the ancient times like:

It is believed that whenever a high authorized or significant personality died, the precious stuffs and the loyal animals were also buried  adjacent to the died figure’s graveyard.

During the pre-Islamic period, immolation of camels and horses were done furnished with armours and precious elements. This custom was called Baliya practice. In fact, one can found the existence of the original graves of 17 camels and 2 horses belonging to 1700-1800 years ago.

Mleiha potentially allows you to go through the sites and get a thorough knowledge about the Paleolithic, Mesolithic, Neolithic, Bronze, Iron, and pre-Islamic period. These can be known through the manuscripts, style and language of writing, fossils, ornaments, beads, clothes, way of composing the tombs, minarets, drainage system, etc. and other such buried or abandoned remainings.

Mleiha archaeological centre is highly significant because of the following reasons:

1.An opportunity to glance at the wealth of the historical artefacts at the Mleiha archaeological centre

2.A chance to trek to Camel rock.

4.Get benefitted by the 66 locally guided tours.

Mleiha is keenly focusing the trekking over the mountainous terrain like the ‘Valley of Caves’. It is intended to construct accommodation, a campsite and an archaeological observatory in this centre in future. This may consume an investment of about UAE Dhs 250 million.