It was on 11th September, 2015, that a red crane collapsed and fell on the Eastern side of Mecca causing immense damage to the pilgrims. It was the busiest time of the year as millions of Hajj pilgrims were about to arrive for worshipping. It was really a painful moment .

According to the sources it has been known about 111 people died and 394 people were injured in the incident.

The Grand Mosque in Mecca— Masjid Al-Haram— was being decorated or prepared for the for the famous Hajj. The incident was unexpected and destructive. Soon after the incident, an investigation commission was put into effect. The whole city was filled with condolence.

However, the annual pilgrimage program was going on. Many great leaders of different countries including Narendra Modi (Prime Minister of India), John Kerry ( US Secretary of State).

The next day, many blood donors queued to donate blood as the hospitals were running in shortage of blood deposit due to the sudden  mishappening which was not expected at all.

The crane belongs to the Bin Laden Group of Companies. Due to the deadly Mecca Crane Crash, the owners of the same crane —The Bin Laden—  were banned.

They loose this multi-million project. At the same time, they are no longer able to work on any new (or existing ones too at that time) building or construction projects.

Also, they are not allowed to go or affected and shattered the city few hours ago for the destruction.

Reasons behind the Mecca Crane collapse

Many believe that the strong winds and heavy rains were the apparent reason behind the collapse. 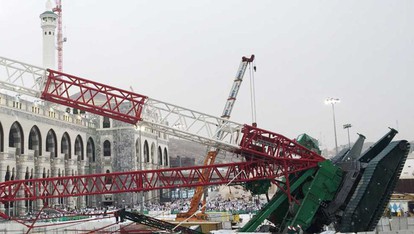 On the contrary, some are also of the opinion that the reason behind the great fall is carelessness.Strong winds are not that much capable of breaking the huge crane. The reports of inappropriate and misuse of massive equipments causing mass destruction.

The Bin Laden Group of companies

The Bin Laden was an eminent name in the industry. The company was established on 1931.

It has handled numerous multi billion dollars projects and have successfully constructed many international Airports, colleges and institutions, etc.

However, unfortunately, the incident loses the company’s money and reputation.

Eventually, 14 people were claimed to be accused of the crane crash. And the defendants were from Saudi Arabia (six in number), Pakistan (two), Jordan (1), Phillipines (1),  Canada (1), Egypt (1), Palestinian territories (1) and United Arab Emirates (1). According to King Salman, if the cranes were not in use, the arms of the crane must not be left up.

However, he allotted sumptuous amount of money to the relatives of those who died in the incident and to the injured persons too. Collapsing of a  1,350 ton crane is not a mere thing at all.

According to Indonesia’s official report, two of their nationals lost their lives and more than thirty of the same were severely injured. Malaysia informed that among 16 nationals, 10 of them were injured and six were still untraced.

The reports from India revealed that two citizens were expired in the collapse. And Iran spoke that there were 15 citizens who were injured and were present in the hospital.

The condition of all the hospitals were highly congested and alerted.

In spite or such an adverse condition, the worshippers thronged on the next day and visited this holiest place of Islam.

Obviously, the affected zones around the red and white cranes were banned thoroughly.

The Mecca Crane crash shocked everyone. It was like the deadliest nightmare. Soon after the incident, the investigation was put into action by the governor Prince Khaled al-Faisal.

As per the information got by the Saudi owned Al Arabiya TV, it is known that heavy rains and strong winds blowing causes various trees to uproot, broke or destroyed the panels, etc. Such an extreme wind were the probable cause behind the massive deterioration.

For your kind information, let’s tell you that the report was given by the General Suleiman al-Amr. Suleiman al-Amar was the director general of the Civil Defence Authority.

The news agency AFP clearly informed that if there was not a covered walkway, the situation can be worse and worse.

The walkway limited the extended fall of the crane. And the information was gained in a conversation with a local worker.

The co-founder of the Islamic Heritage Research Foundation and a critic of site redevelopment at Mecca— Irfan Al-Alawi blamed the authorities and said that it was the ignorance and negligence of the relevant authorities present there. Their unworthiness in handling the huge equipments was undoubtedly the major cause behind the deadly crane crash.

Alawi further added that the concerned authorities were careless, and dumb having no worries about the health, safety and prestige of the zone. A wrong step brought such a severe and piteous circumstances.

Nowadays, the Hajj is safe from any sort of unfortunate events. The authorities put their best effort in providing proper care and protection to the pilgrims.

Some work was under construction which basically focusses on expanding the area by four lakhs square meters (4.3 million square feet). This will help to accommodate 2.2 million people approximately at a time.

A plan for setting up a huge clock similar to the Big Ben in London was also going on. The purpose behind constructing the clock is to help the Muslims to perform their daily prayers at the accurate time.

The inner workings of the said clock is comprised of computerized chronometer center.

Investigations revealed that the Bin Laden Group were in part responsible for the Crane crash as they do not follow the safety guidelines properly. King Salman issued one million Saudi Riyals for the injured with permanent disability.

In the same year (2015) and same month (September), but different date, that is, 24 September, a stampede occurred which was deadlier than the Mecca Crane crash. In the same phenomena—the stampede— more than 2000 people were died.